William Tai (ex. SURAMA) shares a graceful and powerful Fontaine Design Group hull with her sistership, Anakena, from Royal Huisman Shipyard, but her bold and refreshing interior put her in a class by herself.

Conceived as a world cruiser for an experienced yacht owner, no expense was too great when she was built and no detail too insignificant in her creation. Based upon the previously proved Fontaine design, Anakena, William Tai’s relatively shoal center board draft and balanced ketch rig, with twin engines, is an ideal cruising configuration.

This has achieved this by taking the yacht back to the yard that built her, ensuring that her pedigree has been maintained and that the work undertaken is to Royal Huisman’s meticulous standards.

She has been extensively upgraded throughout with all areas focused upon during this comprehensive refit period - including new teak deck, paint, interior and exterior upholstery as well as a complete service of all technical systems and rigging.

William Tai is now in her new livery of flag blue and oyster white, completing her refit in 2010, Winning the Superyacht "Best Refit - 2010" Award 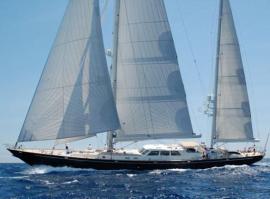 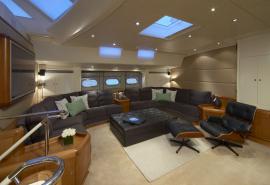